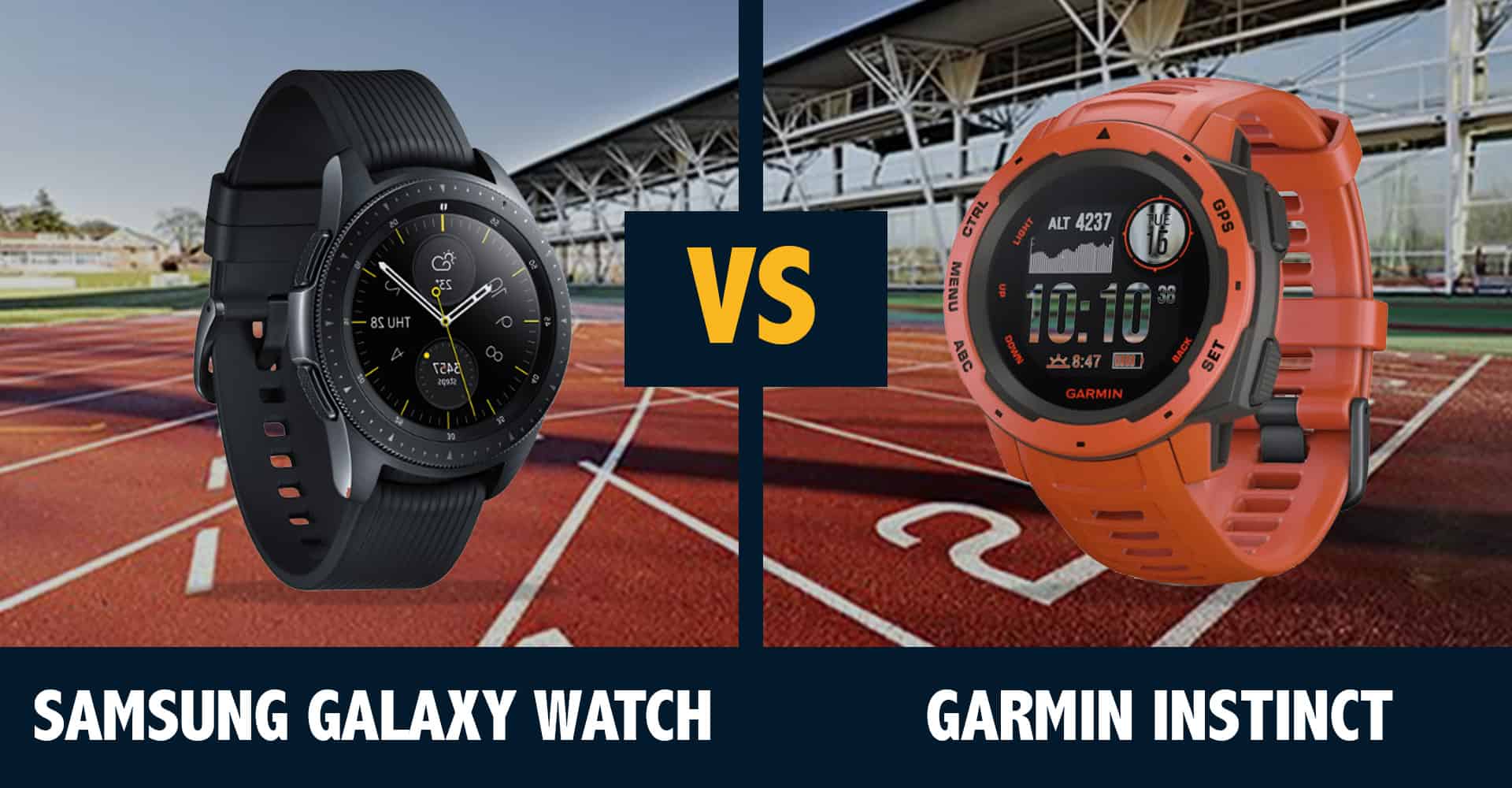 If you’re confused about choosing between Samsung’s Galaxy smartwatch and Garmin’s Instinct, let us help you make a well-informed decision with this comparison review of both devices. Essentially, the main differences between the two products are:

Check out the full details below.

The Samsung Galaxy has a larger display resolution of 360×360 pixels for both the 46mm and 42mm models. Also, both variants come with full-colour, always-on display as well as Corning(R) Gorilla(R) Glass DX+ and circular Super AMOLED. The 46mm model has a display size of 1.3 inches or 33mm while the 42mm model has 1.2 inches or 30mm.

Even though Garmin has a smaller resolution of 128×128 pixels with monochrome display, it also comes with sunlight-visible and transflective memory-in-pixel (MIP) type to ensure readability even under direct sunlight. The display also features a custom, two-window design in a size of 0.9 inch (23mm). The lens is made of chemically strengthened glass.

The Galaxy Watch utilizes high-quality plastic and stainless steel in its design and construction. The lens is made of Corning(R) Gorilla(R) Glass and the initial strap is of lightweight silicone.

In the Garmin Instinct, both the bezel and the case are made of fiber-reinforced polymer. The lens is made of chemically strengthened and scratch-resistant glass while the strap material is made of silicone.

The Galaxy Watch comes with 472mAh battery for the 46mm model, and is advertised to go for 7 days with light usage. Personal reviews of Galaxy Watch owners, however, revealed that the battery can only go for 3 days with normal usage. On GPS mode, the Galaxy Watch is meant to run for 24 hours. On the other hand, the 42mm model has a 270mAh battery, which is supposed to be good for 4 days. On GPS mode, battery life is 17.7 hours.

The battery life of the Instinct Watch can go as far as 14 days when on smartwatch mode and up to 16 hours if on GPS mode. When on UltraTrac mode (a Garmin battery-saving feature that periodically turns off GPS), the battery can go as far as 40 hours.

Samsung Galaxy Watch’s water resistance is rated at 5 ATM, and thus, can be used to dive or swim to as deep as 50 meters. Before you swim, however, you must turn on the device’s Water Lock feature to avoid accidentally activating your watch through the touchscreen or a wake-up gesture.

The Instinct, on the other hand, has a higher waterproof certification rating of 10 ATM or as deep as 100 meters. Aside from that impressive waterproof rating, the device is also built for shock and thermal resistance, as it is built to U.S. military standard 810G. The polymer case complemented with the scratch-resistant and chemically strengthened display gives the watch further durability and strength.

The Samsung watch comes with a range of fitness and health apps to keep track of your activities. Specifically, the watch has trackers for cycling/bicycling, swimming and sleeping. There are also monitors for calories, heart rate, distance travelled and steps taken. You can further monitor and log your heart rate and calories in greater detail when you sign up and use the Samsung Health app.

The Garmin watch has the same health and fitness features of its Samsung counterpart, even the cycling features where the Instinct lets you track progress on your regular cycling and even both indoor and outdoor biking. In fact, the Instinct is packed with more fitness tracking and gym activity features such as floors climbed, intensity minutes, cardio and strength workout profiles, and automatic rep counting. This means that besides Running, Cycling & Swimming, Garmin Instinct is able to track a range of activities such as Snowboarding, Kayaking, Rowing, Yoga, Hiking and Skiing, among others. The device is also compatible with TrueUp(TM) and Move IQ (TM), which helps build your fitness profile to understand your workout routine in detail. In essence, the Garmin watch is geared more towards climbers, hikers, trail runners and other types of rough outdoor activities.

The Instinct unit utilizes Garmin’s own propriety operating system but like the Galaxy Watch, it is compatible with iOS and Android devices. What makes this product stand out, however, is that it’s also compatible with other Garmin satellite communicators and dog/buddy GPS devices such as the inReach(R), Alpha(R) and Astro(R) series.

The Galaxy Watch has GPS and GLONASS (Global Navigation Satellite System) support, which makes tracking convenient. Complemented with the watch’s colour display, you can run map-based apps (e.g. Google Maps, HERE WeGo and even Uber) on the device itself. You can also connect the Galaxy Watch to your mobile devices for greater convenience.

The Instinct also has GPS and GLONASS sensors, but what the Galaxy Watch doesn’t have is the support for the Galileo global navigation satellite system. This means that the Instinct can assist the users to record and monitor their tracks on the mountains and in wilderness. The Instinct can also support courses, allowing you to download and follow pre-planned routes. On the downside, the Instinct’s monochrome display lacks the sophisticated map interface that the Galaxy Watch can provide. On the plus note, and as previously mentioned, the Instinct is compatible with other Garmin GPS and satellite communication devices as well as Android and iOS smartphones. 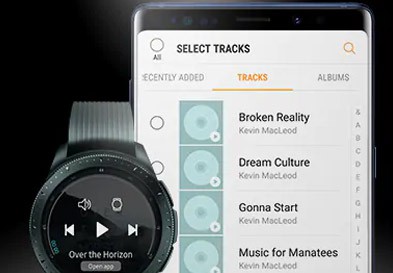 The Samsung watch has music playback features, which let you run the Spotify app (both the free and premium versions) on the device itself. The rotating bezel is used to scroll through the menus and lists while the touchscreen can be used to make the selections or toggle between the menu and the playback controls. Unlike the premium Spotify version, the free version lets you play the songs within your playlist but doesn’t allow you to choose a specific song to play. Other features that aren’t in the free version but available in the premium version are the buttons for skipping forward and back as well as the options for shuffles and repeats.

On the other hand, the Garmin device has music control features, including volume adjustment, to play songs from your smartphone. It doesn’t have its own music storage and playback. It also doesn’t support music streaming services.

Bixby is the voice assistant in the Samsung watch and can handle some simple questions only. Some consumer reviews also revealed that Bixby isn’t much different with the S-Voice. It’s also slow to respond, too.

The Instinct doesn’t have a virtual mobile personal voice assistant.

The Samsung Galaxy smartwatch has a lower price of between S$398.00 and S$448.00 (including GST) depending on whether you get the 46mm version or the 42mm one.

The Garmin smartwatch has a higher price compared to its Samsung counterpart at S$499.00 including GST.

Both of the watches have their own strengths and weaknesses. The most important factor when it comes to deciding between these two brands is the nature of sports or active lifestyle that you as the user usually engage in.

The Garmin watch, on the other hand, is more suited for outdoor activities. In fact, it is built for hardcore adventurers and has powerful, practical features that help in mountain climbing, outdoor tracking and course planning. It’s also compatible with various GPS and satellite communication devices. With its 10ATM waterproof rating, the device is also perfect for deep sea divers.